Written by our very own client, Deanne Caudle

It was 1979.  Tom, an Iowa State student from Minnesota, had just read an article about fantasy football in the Viking Report. The premise was easy: find some friends (he had plenty!), choose players from the NFL, and receive points by how those players scored. Most points win. Simple.

So began the RFL, the Rebel Football League. Two years later the SFL, the Superior Football League, was started by other friends. In a few more years the two would merge, and 40 years later, the SFL is still going strong with seven members. My husband, Rick, was one of the original SFL owners.

Compared to many of today’s fantasy leagues, their rules were simple.  Each owner would play one quarterback, three wide receivers, three running backs, one kicker, and a defense.  Points were based on the length of the touchdown run or reception. Field goals were scored by distance of the kick. Extra points were one point.

Defensive scores were a team effort. If any one member of your defense or special team scored a touchdown, it was a defensive score and it was scored just like a run play for scoring points.

With these simple rules, these two fantasy leagues started—and by these rules the SFL continues to play. Over the years, there has been some discussion of modernizing the rules,  such as points for a 100-yard game by a running back, but the owners always vote against it.  They like the simplicity of their game.

I have been commissioner since the 1980’s.  That means that I am in charge of setting up the draft.  In the old days, it also meant scoring every single week by hand.

Yes, by hand. Before fantasy football could be scored by a sportscenter, I studied the Des Moines Register’s sports page. Every week, I looked up each game, looked for player stats, added them up, and mailed out the results.  Once upon a time the commissioner’s job really was work.

If there was a scoring dispute, the Des Moines Register became the final judge. There are two things I miss about scoring that way. First, I was much more familiar with the players.  More than once, I noticed a player that no one “owned” that was doing well and could recommend that Rick drop a player to pick up the one that I found. I also miss the weekly calls as owners changed their line-ups.

The annual draft had been an in-person gathering for 40 years—until the 2020 draft was switched to video chat, but only due to Covid. Draft Day is a bit of a party, an excuse for old college friends to meet up. Regarding the actual game, owners draft twenty players, including three from the previous year’s roster.  This rule is unique from other systems and can be good or bad.  If you are really fortunate, you have more than three players that you can keep.  It can be bad if you don’t have three players that you want.

Some of the best memories? The year Dave drafted Dan Marino as a rookie quarterback!  We are all still on the hunt for the next Dan Marino, though Clyde may well have found him with his draft of Mahomes as a rookie. Another great memory was the year that juice boxes were found in the cooler with the beer. Owner Mark asked, “WHO PUT JUICE BOXES IN THE BEER COOLER?!” Times changed with marriages and kids. Another memory is a quote that I attribute to Rick, “Injuries can hurt.”

Best of all, each year Opus, from Bloom County, makes his appearance. He is the mascot for the SFL, and the yearly winner holds Opus for a celebratory photo. This photo is from 2018, I wasn’t the winner, but I held Opus anyway.

Beyond winners and points, what the SFL truly accomplished was keeping a connection between these seven men. There were a few times when someone was unable to make the draft, usually for family reasons. The missing person would give a draft list to another player’s wife, who would draft for them;  but overall, the league became an unbroken bond—until the death of my husband.

But It continues on. I continue to play Rick’s team,and have even finished in the top three for three seasons running. Maybe I’ll even win this year, I’m actually in first place. (Thanks, Phil, for the tip to keep Russell Wilson.  You always give great advice!) If I’m lucky, I might be able to hold Opus in my own right this season. If I do, it’ll be with memories of Rick, who made good friends and how they kept together, season after season. 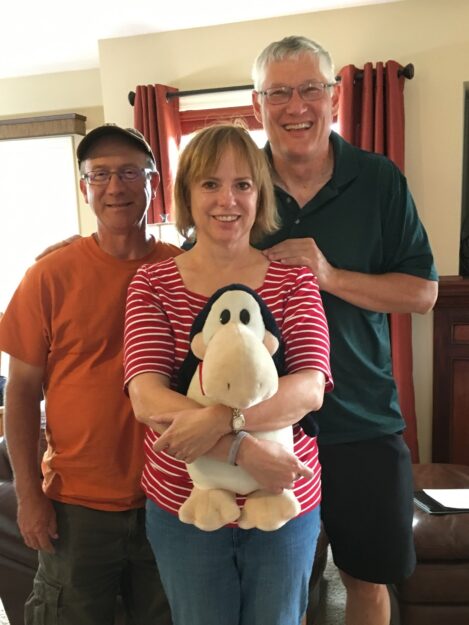 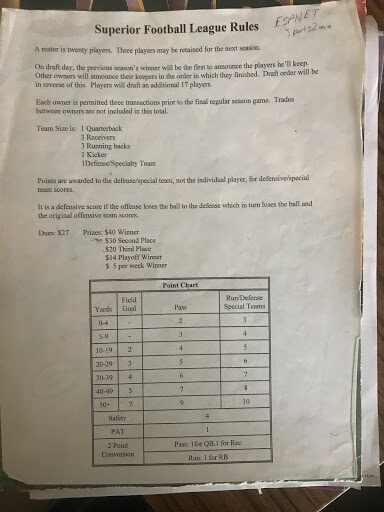